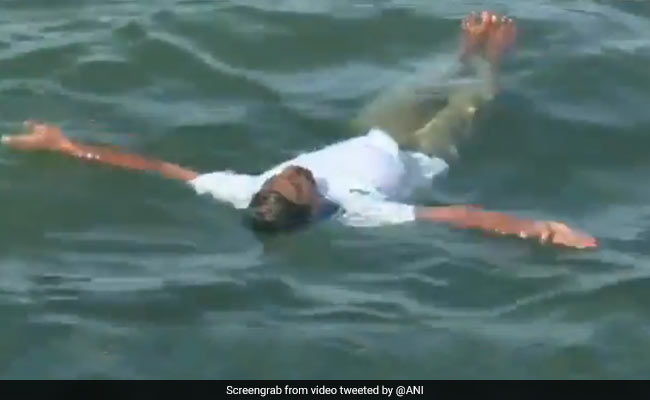 Aqua yoga requires a person to perform the asanas in water.

Rameswaram (Tamil Nadu): People practised aqua yoga in the Palk Strait in Rameswaram on the occasion of International Yoga Day on Sunday.

Aqua yoga requires a person to perform the asanas in water.

The 6th International Yoga Day is being observed with the theme of ”Yoga at home, Yoga with family”.

Prime Minister Narendra Modi in his address earlier today had said that Yoga enhances our quest for a healthier planet and goes beyond race, colour, gender, faith and descent.

Chief Ministers of various states, several Union Ministers among others performed Yoga at their residences along with their families, keeping up with the theme of the current year.

The International Yoga Day was proposed by Prime Minister Modi in his speech at the United Nations General Assembly (UNGA) on September 27, 2014.It is observed on June 21 every year to spread awareness about the importance and effects of yoga on the health of the people. The word ”yoga” is derived from Sanskrit which means to join or to unite.

Palava Samachar - October 22, 2021 0
KALYAN: A Dombivli family who had gone on vacation returned home to find valuables worth Rs 12 lakh including 250g in gold ornaments missing....

Education First Priority: Father Of Girl Who Cycled 1,200 Km Amid...