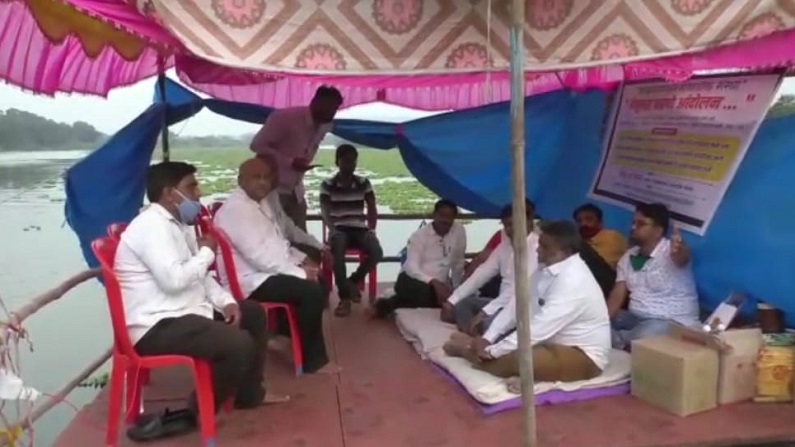 kalyan 13th February:
The agitation against the pollution in Ulhas river is going on in the river basin and the NCP has become very aggressive as there is still no movement from the administration. NCP district president Jagannath Shinde has warned the administration to take to the streets and start agitation if the issue of pollution is not resolved immediately. Jagannath Shinde met Nitin Nikam of ‘Mee Kalyankar’ who went on a hunger strike in Nadipatra and expressed his support.

I have been carrying out this agitation for the last 3 days on behalf of Kalyankar Social Organization to decontaminate Ulhas river. But so far the administration has not taken any notice of this issue and has not started any movement. NCP’s district president Jagannath Shinde has strongly condemned this irresponsible behavior of the administration. He also warned that if the issue is not resolved soon, the NCP will take to the streets and start agitation.

In the coming week, Municipal Commissioner Dr. This will be discussed after meeting Vijay Suryavanshi. Jagannath Shinde also clarified that he will meet NCP state president Jayant Patil, environment minister Aditya Thackeray and guardian minister Eknath Shinde in this regard.

Meanwhile, the representatives of ‘Mee Kalyankar’ organization, who are protesting against the pollution in Ulhas river, see the growing support of political parties and social organizations.

Today 52 corona patients were found in Kalyan Dombivali while 76...

Today 87 corona patients were found in Kalyan Dombivali while 125...