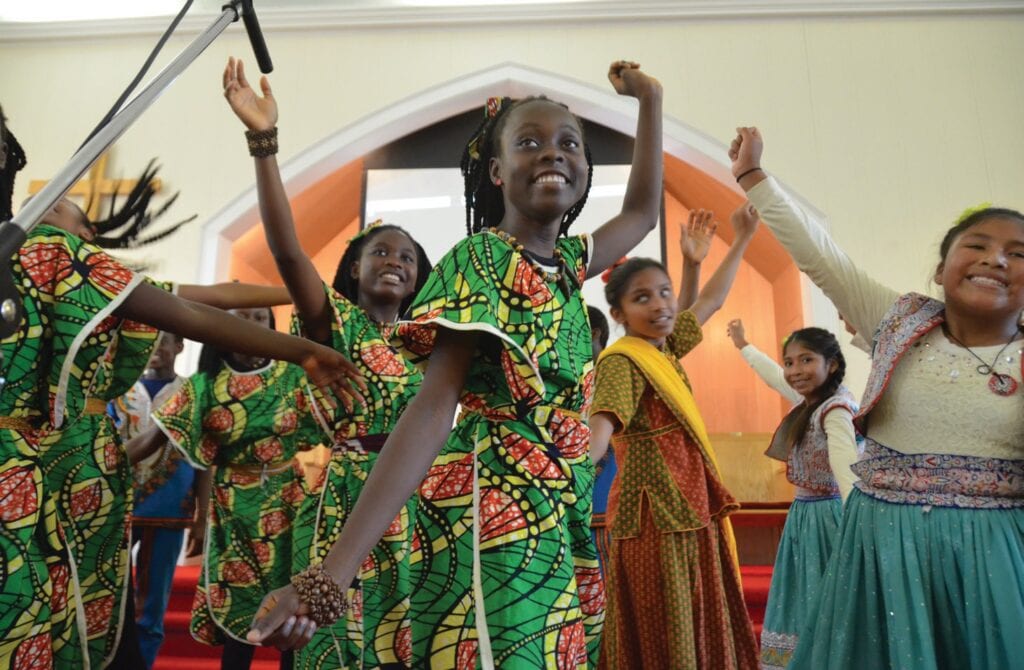 Members of the Matsiko World Orphan Choir during a 2016 performance at Central Baptist Church. The church’s rector, Kurt Satherlie, is going on a humanitarian mission to Liberia with the choir’s parent organization. PHOTO BY ANDREA VON HOHENLEITEN

Nearly nine out of every 10 Liberian fathers attend church, according to Don Windham, founder of the International Children’s Network, a nonprofit organization based in Washington state.

Despite that religious devotion, the majority of these men are estranged from their families. In an attempt to rehabilitate them as parents, Windham plans to improve the second statistic by exploiting the first.

“The lack of a male role model is the common denominator with struggling children around the world,” he said. “In Liberia, it is unique to see a mother and father together.”

Windham will depart Jan. 22 on a transatlantic flight from New York City to the Bethel Cathedral of Hope in the capital city of Monrovia. Joined by the Rev. Kurt Satherlie, they are hosting a three-day conference from Feb. 1-3 to equip Liberian pastors with the tools needed to teach men about the importance of accountability.

“If these pastors can get this message, and bring it back to the fathers, we really think we could put a dent in the problem,” said Satherlie, rector of Central Baptist Church. “At least we can plant the seed. I am really looking forward to this trip because I believe we can start eradicating this horrendous situation.”

Because orphaned children are an epidemic in Liberia, Windham said having face-to-face meetings with thousands of estranged fathers is not a practical solution, and neither is working with the corrupt government. The commitment of these Liberian men to God, however, creates the ideal middleman.

The Americans want to attract upwards of 1,000 religious leaders to the conference so the clergy can pass that educational information onto the men in their parishes. According to Windham, the children left behind by these men are the most prone to crime, dropping out of school and being trafficked. Single mothers, in desperate attempts to get their children a better life, transfer custody to strangers, and that risky move often has catastrophic results.

Windham’s journey to establishing the International Children’s Network began with a trip in the 1990s. His friend, an Irish doctor who was traveling to Africa and India to provide volunteer medical care, invited Windham to tag along. While in Uganda, Windham met a boy named Abraham.

The African, who would sneak into school and perform at the top of his class, said he would like to be a doctor. College, however, was $50 a month. That is when Windham got the idea of sponsoring him. Abraham was given money to attend Makerere University, and he is now a heart surgeon.

“There are a lot of stories like that when people step up,” Windham said.

That has become the mission of the group: to provide as many of the world’s 600 million orphaned and at-risk children with complete educations through sponsorships. The trip next month, however, is an attempt to curb that cycle of poverty so sponsorships are no longer needed.

Satherlie, a board member of the organization, is committed to those efforts. He was introduced to Windham through the Matsiko World Orphan Choir, a group of African and Asian children, managed by the network, that travels the world to tell their stories and solicit sponsorships. The choir visited Jamestown in 2017, 2018 and 2019, and Satherlie and his wife, Jen, sponsor a Liberian child through the network.

Windham and Satherlie also are traveling with a third American, Bob Chapdelaine. Like Satherlie, Chapdelaine was introduced to Windham through the Matsiko choir when the children performed six years ago in Cleveland. Chapdelaine and his church housed the children during their stay.

“We had people sleeping everywhere,” he said. “But when they left, my wife had tears in her eyes, and so did our neighbors. We were hook, line and sinker.”

After he retired in 2016, Chapdelaine, a handyman, was asked by Windham if he wanted to volunteer his time to build a palava hut along the African coastline. This open-air dwelling is used by Liberian communities for social gatherings and municipal meetings.

Thinking he would never see the hut again, Chapdelaine visited Liberia again in 2020 and the hut served as a cathartic encounter.

“I’m sitting in this palava hut on a hot evening with the Matsiko kids performing for us,” he said. “I was just so taken back by what God was allowing me to experience.”

While the three men taking the trip are Christian, Windham said this is not a mission of faith.

“This is going to be a work in progress,” Satherlie added. “We’re not just going to come in for three days and leave. We are going to keep this conversation going.”

The International Children’s Network is seeking donations to subsidize its humanitarian trip to Africa in February. Checks made out to Central Baptist Church should be delivered to 99 Narragansett Ave. Write “Liberian conference” in the memo line.